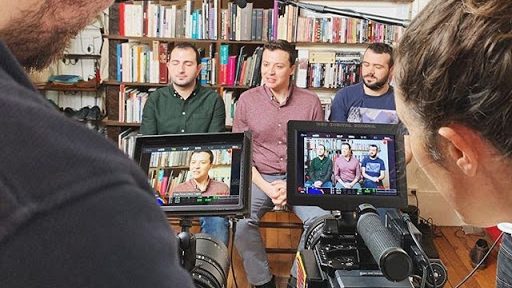 Before the production company can write up the bid, they will need to take a few things into consideration:

In pre-pro the team will need to spend time putting together documentation, hiring crew, making travel arrangements, etc. That will mean pre-production days for all of the key team of Director, Producer and Director of Photography.

For production, the production company needs to film in both Palo Alto and Oakland, which, even on a good day, requires some travel time. Together, the Director, Producer and Cinematographer decide that this will work best as a minimum 2-day shoot.

On day 1, the crew will start in Palo Alto, film the CEO’s interview and some b-roll around the office in the morning, then drive over to Oakland for the afternoon at the factory, where they’ll conduct the remaining interviews.

Day 2 will be all about the factory b-roll and vérité footage. It’s a working facility, and safety is paramount, so that might mean wearing protective gear, attending safety briefings or being accompanied at all times by a site rep. So a full day is the minimum required to allow adequate time to get the footage needed, but do it in a safe and compliant fashion.

For the team traveling up from LA, there will also be travel days to account for. These will be charged at a lower rate than production days, but should still be included.

The production company will need some local crew to help out on the shoot, and the Director, Producer and Director of Photography will work together to figure out which roles would be needed, and what those crew members would cost. In this case, they are looking at:

During the call with the client, it was identified that only a small number of drone shots would be needed, which may only require about an hour of time filming with the drone. Most freelance crew charge day rates, regardless of the number of hours required. This is because it can be difficult, logistically, to book more than one job on one day, and because what starts off as a 1 or 2-hour shoot can often extend unexpectedly or timings can change so that a crew member who was needed in the morning is instead needed in the afternoon. If the freelancer is charging a lower rate, or if he or she has booked a second job on the day, that limits their flexibility, which is why experienced crew members will charge a flat rate, usually covering up to 10 or 12 hours of work.

Because the Drone Operator is only required for a short time, the production company decides to look for an Assistant Cameraperson who also has experience as a Drone Operator, allowing for maximum flexibility and also to help keep the bid competitive.

Of course, equipment is needed for the production, some of which the company has in-house. That includes the cameras, tripods, media, monitors, wireless follow focus unit, lights and batteries. The production company rents that gear as a complete package to the production, but at much lower rates to the client compared to renting the gear from a separate equipment rental house.

The Audio Mixer and AC/Drone Operator’s day rates just covers their time, so there is also a rental fee for their audio gear / drone.

And based on the desired creative approach, the Director and Director of Photography have determined that they would like to rent vintage cinema lenses and lights locally, which will be an additional cost.

The production company plans that when the production days are completed, an Assistant Editor will do some basic initial work first– tasks like off-loading all the footage from the camera’s memory cards onto the file server. Every production company works differently, but make sure you check in on how they handle file archiving and back-up. At Long Haul Films, files are then backed up twice locally, as well as copied to long-term archive tapes (yes, tapes, but really fancy, modern ones).

One footage is backed up, the Assistant Editor can start on basic but essential tasks like syncing. In this case, syncing involves lining up the footage from the two cameras that were used in the interviews with the sound files from the Audio Mixer’s recorder. Once those are synced, the audio tracks can be sent out for transcription. There are online services, one of the most used is Rev.com, that offer reasonably priced and incredibly quick transcriptions of interviews.

This is helpful in the post-production process for documentary-inspired branded content, allowing the team working on the edit, which usually includes a Senior Editor and the Director, to quickly scan through the material as they pull together the story: it can be much quicker to read through what is said on paper, rather than watching through all of the footage.

The Assistant Editor may also go through all the b-roll and identify the best clips that will be most useful in the piece, while getting rid of footage that won’t work for one reason or another.

Next, the Senior Editor will step in and take the project through to the first version that is shared with the client. This will be an edit which brings together the interviews and other footage to tell the story, and may include the sound mix, the color grade, titles and lower thirds, company logos and calls to action as appropriate.

Once the rounds of review are completed, and everything is finalized, the Senior Editor will output the final file, as well as make the shorter, social media edits that the client wanted.

Out of pocket costs

There will be some hard costs that the production will pass onto the client.

This includes things like airfare and hotels for the traveling crew, costs to transcribe all the interviews, licensing costs for whatever music is ultimately chosen.

There may also be costs for per-diems, which is a set amount per person, per day, to cover things like meals, snacks, coffee, drinks, etc.

Next week we’ll look at the bid we’ll put together based on these cost considerations.