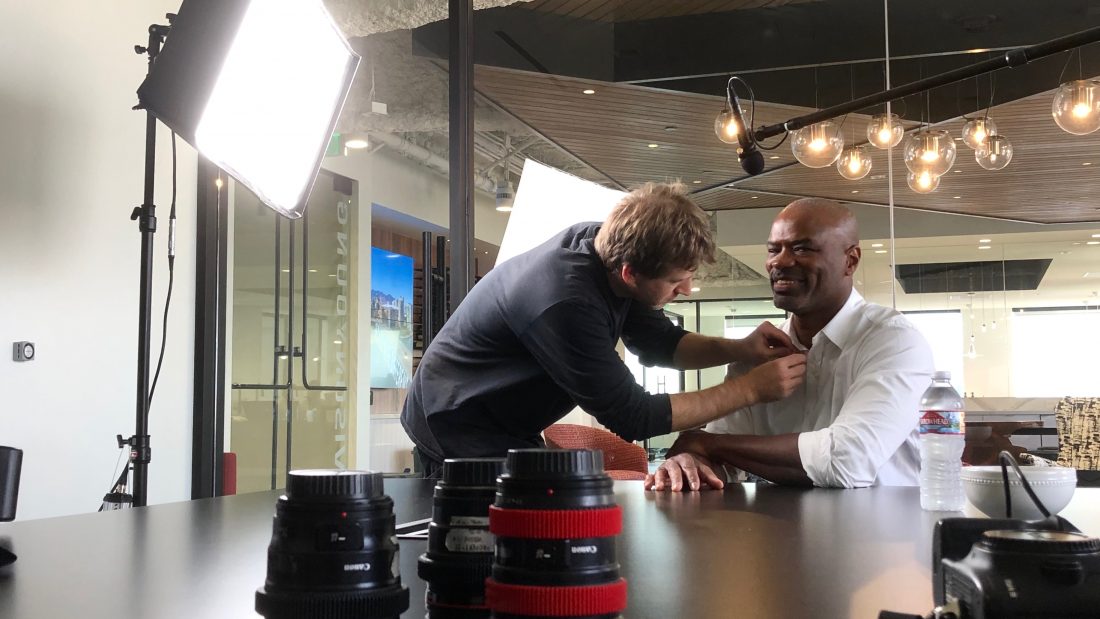 Gaffer: The head electrician, responsible for managing the practicalities of lighting as well as assisting the Cinematographer in creative choices around lighting.

Generator: A diesel-run power source – needed if you’re not able to run off house power.

Gimbal: A camera stabilizer that allows smooth moving and tracking shots. The modern successor to Steadicam.

House power: The electrical power that a location already has, which is often enough to run at least some of the lighting required for the shoot, along with power for cameras, monitors, the Director’s phone charger, etc. Most household outlets are 15A, which means they can safely run around 1500w. That doesn’t get you very far with old tungsten light fixtures, but modern LED lights draw a lot less power and one 15A circuit might cover your whole lighting setup.

Inkie: One of those old, inefficient tungsten lights, with a fresnel lens on the front. Inkies are the smallest of the traditional light sizes, drawing just 100w of power.

Interrotron: Invented by documentary godfather Errol Morris, the Interrotron allows the interviewee to look right down the lens while feeling like they’re chatting face to face with the interviewer.

Key Grip: The head grip, responsible for moving almost anything on set that needs moving and setting light modifiers like diffusion frame or flags.

Lavalier (or just lav): A small, unobtrusive microphone that is typically clipped onto a piece of clothing or (increasingly) hidden among folds of clothing on the talent.

Lower Third: A graphic that appears on screen to tell the viewer who someone is and any other pertinent information, like their job title or their relationship to another character. Usually used in documentary-style content, but occasionally used elsewhere.

Martini: The last shot of the day. Because the next thing you do is go to the bar, according to the norms of old Hollywood.

MOS: Denotes that sound is not being recorded. You might say “these next three b-roll shots are going to be MOS.” Entire books could be (and probably have been) written about the origin of this phrase, so we won’t go into it except to say that the mitt-out-sound explanation seems the least likely to us.

Motion Graphics: These are usually generated in post production and are any moving graphical elements you see on screen, like a lower third that slides into position, or an animated company logo at the end of a piece. Motion Graphics work is usually much more time-intensive – and therefore expensive – than regular editing work.

Music Licensing: If you want to add music to a piece of video to help sell it emotionally, then you need to pay to license that composition and recording. For well-known songs, getting these sync rights can get very expensive very quickly. Thankfully there are now a plethora of more economical music libraries that license music for branded content at a range of prices.

Per diem: A fixed amount of money given to crew to cover their daily expenses – like food – while they’re on a shoot. This typically varies depending on whether someone is working as a local and can be reasonably expected to pay for two of the day’s three meals themselves.

Points: Something people will loudly repeat if walking through a set or location while carrying something that has the potential to injure someone – like a light stand or a chair. If you hear “POINTS!” check your surroundings to make sure you don’t inadvertently step into the path of something that could injure you.

Producer: This a job title that can mean a hundred and one different things in different contexts. In the case of a branded content shoot it usually means someone responsible for the logistical smooth-running of the shoot. Unlike in feature films, where the Producer is the ultimate boss of the film, branded content Producers often answer to the Director.

Pull Focus: The AC is usually responsible for adjusting the focus distance of the lens as either the camera, the subject, or both move through the course of a shot.

Next week: P through W