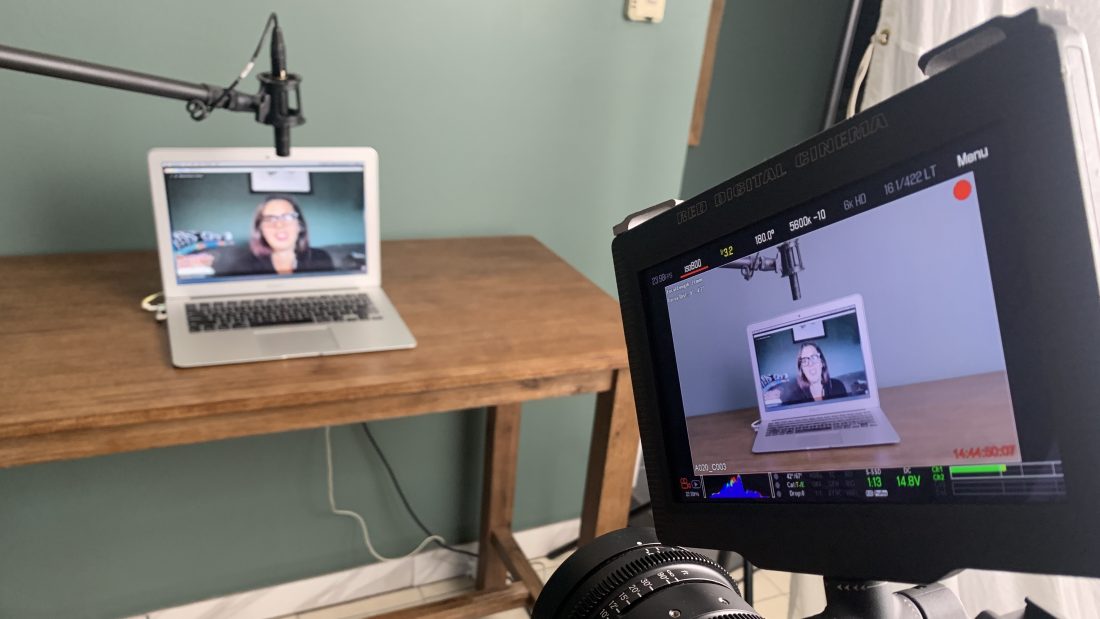 Production in the time of Coronavirus

By Melissa and Tom in Uncategorized

Here’s a question that’s been on our minds a lot the past few weeks; what does film production look like going forward?

First we’ll state the obvious: the video and film production industries have been hit hard by the impacts of coronavirus. At the same time, there has been a soaring demand for content as people stay at home, watching streaming platforms and Instagram stories. There’s a lot of uncertainty about when productions of any size will be able to ramp up again, but there’s no doubt that there will be a need to figure out how in-person filming functions safely in the age of COVID-19.

Our team was filming out in the field up until just a day before the shelter in place orders were issued in Los Angeles, so we were already putting new practices in place to protect our subjects and our crew, and have been using some of the unexpected downtime this spring (usually our busiest time of year) to think about potential next steps.

We’ve been watching a lot of webinars from film industry leaders, and many are predicting that projects which can be filmed with smaller crews will get off the ground sooner than bigger and more complex shoots.

Working with a small crew is something we’re already experienced with at Long Haul Films, since quite a bit of our work is documentary-focused and filmed in real homes, offices or other places where we have limited space and need to leave the smallest possible footprint.

For a typical branded content doc shoot up until lockdown we might have had the following crew:

Compared to a TV or movie crew, that’s already tiny, but as we gear up to shoot again, we’re thinking about how we can tackle in-person projects with the smallest possible crew. We have an advantage in that we, and most of our regular crew collaborators, are multi-hyphenates, i.e. are able to perform more than one job at a time on set. And before COVID-19, we were working on a fast-paced documentary that was playing out in tight spaces where we sometimes could only get 1 or 2 crew members in, so we were already in the rhythm of juggling directing, filming and audio recording at one time, when needed.

Now, is this the ideal way of working if you don’t need to? Well, no, we’ve found over the years that it’s preferable to have individuals focus on one key job on set. But let’s face it, these times aren’t ideal. And we believe it’s critical for us to be transparent with clients about what the minimum required crew is to deliver against the objectives of a project without significantly compromising quality. Because fewer people on set does mean less risk until there’s a vaccine.

This means many shoots going forward will be staffed with a team that looks more like this, and can float between roles:

What extra steps do we need to take?

Because we were filming on projects right up until LA’s shelter in place order, we were already thinking about how to make our shoots safer. Some of the things we had already implemented were:

And, as we think ahead, we’ll be considering things like:

One thing we’ve already been experimenting with is remote filming, using video conferencing technology when we can’t be physically present to shoot.

For the doc project we’d been working on before lockdown, COVID-19 has become part of the story, so filming interviews via videoconferencing software like Zoom makes a lot of sense, even if the aesthetics aren’t to the standard we’d usually like.

As we’re all getting used to seeing each other on webcams, there’s a certain authenticity to seeing branded content captured via these formats, and – as always – content is key, so as long as we can make the content compelling, audiences will be willing to forgive slightly lowered production values. We also work with anyone we’re going to interview to provide hints and tips to help them look their best for webcam filming; including optimal approaches for lighting, ideal background settings, and getting the webcam position to the most flattering angle.

There’s also a great deal we can do, as filmmakers, to guide subjects in best practices for self-filming, using their webcams to record locally as well as transmit over the internet, or using their smartphones to capture simple b-roll content.

Because we’re all connected online, that raw footage can be shared with editors working from home who can then apply some post-production movie magic and elevate the content even further.

Many of our clients have large libraries of video footage, event content, photos and other archival items that have never seen the light of day. Now is the perfect time to revisit source footage acquired before lockdown, and use it to create new edits.

This can even involve combining previously filmed b-roll footage with newly-acquired, remote-filmed interview content to keep the feeling of “fresh” content flowing on your website and social media platforms.

Making the most of production days

And, as we do start to return to in-person filming, it’s going to be helpful to think about how we can maximize efficiencies.

Often, that might mean shooting for more days, to capture more footage that can then be edited into multiple pieces or formats that can be released over time.

Whereas before we might have thought about one shoot day now, and then a second follow-up in a month’s time, now we might think about how do we use two shoot days now in such a way as to gather as wide a variety of materials as possible, and then spend longer in the edit room slicing and dicing that material into a range of content.

The other factor here to be realistic about is scheduling. We will need to move more slowly and take extra time to ensure health and safety protocols are being followed. This is also a good reason to schedule “smarter”- simple practices like finding a way to work in fewer locations to eliminate cast and crew moves can buy valuable extra time.

Be prepared for change

Finally, as we continue to move through this pandemic, the only thing we can truly be sure of is that things are going to continue to change, and we need to be prepared to pivot any of our thinking about how we approach production.

We are going to need to innovate around how we shoot, probably in ways we haven’t even considered yet. Change can be scary, but we’ve found over the years that limitations and challenges inspire some of the best creative thinking, so we’re excited to see the ways that our industry transforms for the better during this time, and we are committed to being part of that change along with our crew and client collaborators.