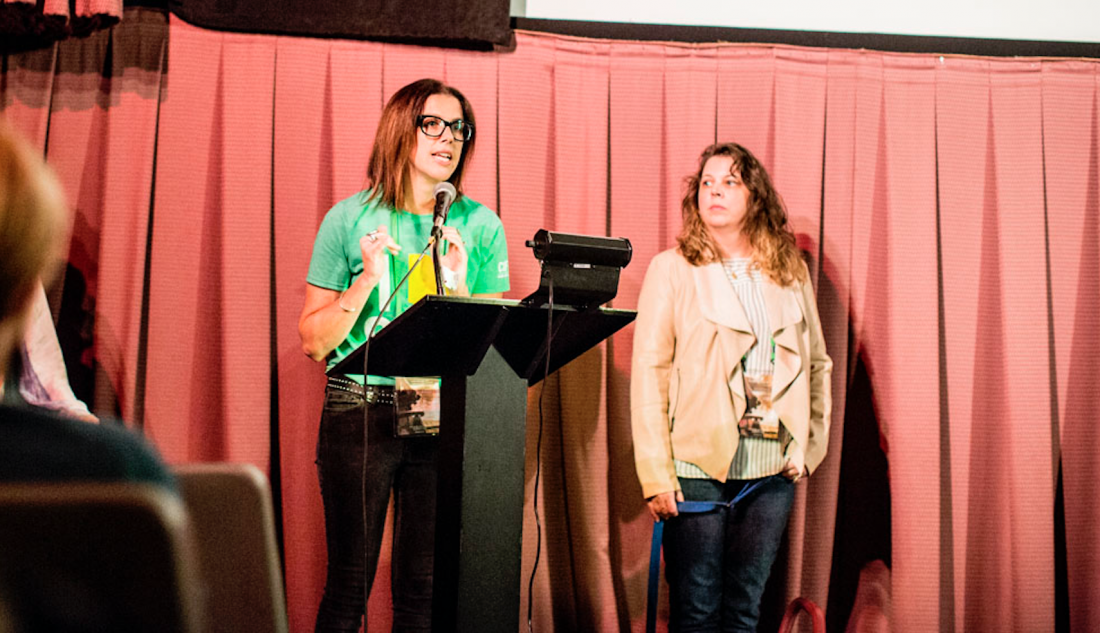 How to nail your film festival Q&A

Four years ago this week (four years!? where does the time go? what is life?), we were preparing for the world premiere of our documentary Adele and Everything After at The Cleveland International Film Festival. It was the first of many festivals where we screened the film, and it inspired me to write this post, which I first shared on Medium, and which ended up becoming one of my most-read posts ever.

With film festival season in full swing, albeit mostly virtual this year, I thought I’d re-share (with a few post-pandemic updates) some of my tips for getting the most out of the post-screening Q&A session.

The Q&A, short for “Question and Answer”, is one aspect that sets the film festival viewing experience apart. For audiences, it’s a contributing element that makes attending film festivals, even virtually, more interesting than curling up on the couch with Netflix. For filmmakers who spend years working on their movies, having people ask geeky questions about the inspiration, the process, the equipment and the creative choices is a dream come true.

But that’s not the only reason why the Q&A is so great. It’s a valuable platform for you and your film, which can help you:

As with all other aspects of your film festival strategy, go in with a plan for your Q&A so you can make the most of the opportunity. After working my way through several Q&As, here are my top tips:

Have answers ready for questions you expect your film will raise

While you never know exactly what audiences will ask, we get a lot of the same questions, including:

How did you find the story/what was your inspiration?

This is a great film festival question, the kind of thing most people will never know about your indie film. Prepare a compelling answer. Mine is all about how Marty and I were neighbors, and how my badly trained dog almost kept us from ever talking, as he would bark at Adele every time he saw her coming.

What was your biggest challenge making the movie?

No one cares about the day that craft services gave you the wrong kind of nut milk in your coffee. Be vulnerable here. I often share about the struggles I had getting Marty to open up to me, and the moment when we were filming in Texas and I thought that we didn’t have a documentary at all and locked myself in the bathroom at Marty’s best friend’s parent’s house so I could ugly cry without anyone seeing.

What did you learn making the movie?

If you are a living, breathing person, there is no way you can make a movie without learning a lot of stuff. I could give so many answers to this question, but I choose to focus on the lessons that are most in line with the overall themes of the film: how important relationships can shape our lives, and the power of being seen and understood.

Where can people learn more about the movie?

I ask the Q&A moderator beforehand to ask me this question, so I don’t miss the opportunity to share our social media and the easy link to sign up for email updates on the film.

Don’t be shy about doing this. Film festival audiences love to share about movies they’ve discovered. Make it easy for them to do so by telling them where they can find you online, and when we get back to in-person festivals, have printed promotional material handy that people can take with them (postcards are great, and cheap to print).

What are your goals, and who else can be part of the Q&A to support those goals?

Our major goal for film festivals was to build our audience and create a deeper connection with them, and we knew that many people were there because they wanted to know more about Marty’s journey and/or they wanted to learn more about service dogs or cared about dogs in some way.

For that reason, whenever possible, we had Marty attend the screenings and participate in the Q&A. Audiences love the opportunity to talk with Marty directly and to learn more about her journey. Many people resonate with the challenges Marty overcomes in the film and I’m convinced that we won our Audience Awards because we created a meaningful experience by allowing viewers to have an unfiltered conversation with Marty; who is a wonderful spokesperson for the film and for issues related to service dogs.

While Adele and Everything After is a documentary about a powerful relationship and is not an “educational” film, we recognize that the movie provides a lot of insight into service dogs and creates a platform for discussion about how they are trained, the laws governing their access and what impact they make on lives. We’ve found that audiences have a lot of questions about service dogs after the film, so whenever possible we have a representative from Canine Partners for Life, the service dog organization that trained Adele, participate in the Q&A and answer more detailed questions about the dogs.

We’ve also used people’s interests in service dogs, and dogs in general, as a way to extend our Q&A sessions into an interactive experience. At several film festivals, we had special sessions after our screenings where audience members can talk directly with cast and crew and meet service dogs and “demo dogs” (highly trained dogs that you’re able to pat and interact with) from Canine Partners for Life.

Holding these events has gained us press coverage and provided the opportunity for lots more audience building, so I’d highly encourage you to think about whether your film inspires opportunities for discussion and engagement beyond a 20-minute Q&A and pitch the idea to the organizers of any film festivals where your movie is screening. Many festival programmers love the idea of special events that help the festival stand out. This stands as much for a virtual experience, as it does for an in-person one.

You are going to represent your film. Be proud (or act as if you are).

I find it frustrating when film directors stand up at festivals and squirm, giggle, or talk down about themselves, the movie or the festival. I get it: you’re used to being behind the scenes and you chose this profession because you wanted your work to speak for you. That’s all well and good, but if that’s how you feel, ask someone else to stand up and represent the film who will hold their head high and talk about it with pride, confidence and passion.

I once attended a film festival in Los Angeles in which amazing directors from the Sundance Film Festival showed their work and participated in extended, juicy Q&A sessions. Most of the directors were so eloquent and so grateful to be there that listening to them made me love their films even more. But one director shuffled out to introduce his film, mumbled into the microphone and acted as if he didn’t care that he was standing in one of the most beautiful theaters in Los Angeles, sharing his work with an eager and interested audience of fellow filmmakers, critics and tastemakers.

I don’t know if it was a coincidence that I found his film to be the worst of the festival, but his surly, disinterested attitude certainly did nothing to make me feel a deeper connection with his film.

This is your moment, own it. Stand up straight, speak clearly into the microphone, give honest and thoughtful answers to the people who spent money and time to come out and support your work. And express some gratitude: thank the people who got you there by acknowledging your team and the festival programmers and staff who work so hard to create events that promote filmmakers.

I offer this advice for all directors, and want to underscore it for female directors, particularly because many women have been taught that it’s more feminine to speak softly, self-deprecate, deflect praise and generally act as if you’re not worthy. You are worthy, so behave accordingly!

I usually traveled to festivals with other cast and crew, and not all of us stood up for the Q&A, so I usually asked one person to be in charge of taking iPhone photos during the Q&A to post on Facebook and Instagram. It can also be cool to stream part of the Q&A live on Facebook or Instagram (with permission from the festival), so people who can’t be in the room can still find out more about the film.

And again here, things are a bit different in the virtual world, but I’ve loved seeing the behind the scenes pictures from some of my favorite filmmakers as they attended this last year’s festivals from their kitchens and living rooms. Extra points if you wear something fancy on top, and joggers on the bottom.

I remind myself of this at every festival. Making an independent documentary film takes years of toil. Completing it and getting it out into the world is a minor miracle. Being chosen by festivals is an enormous honor, and certainly not easy. So when you stand up there for your film, bask in the glory.