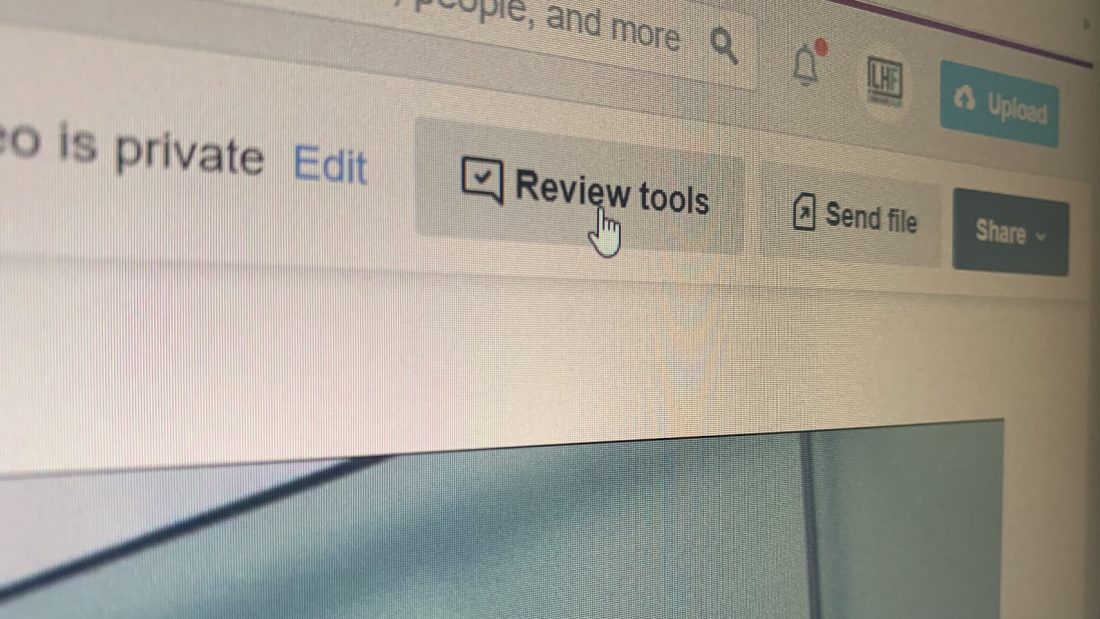 This week we’ll look at the feedback process – the part between delivering v1, making updates and then producing the final deliverable version.

The feedback process can be fraught with potential problems. One the one hand you have a production team who have poured their creative energy and care into this project and feel a lot of ownership around how it has turned out. On the other, a client team who have invested a lot of money into the project and usually have some strong ideas about what they are expecting to see, hear and feel.

Hopefully the pre-production process was good and everyone on the client side signed off on the Director’s plan before shooting began. And hopefully the production team has executed as closely to that plan as is practical. Ideally, everyone is coming into the review process expecting to see broadly the same video.

If that’s the case then the feedback process should be relatively straightforward and focus on minor details of messaging or aesthetics.

If not, then it’s important that the feedback process be respectful on both sides.

For the production partner, it’s key to identify where the disconnect has taken place. Does this finished video deliver against the agreed plan? If so, and it seems like new information or opinions are appearing on the client side (like the dreaded ghost client), that’s okay. It’s not ideal, but these things happen and you need to find a way to a solution that acknowledges that you’ve been thrown a curveball while being open to finding a solution wherever possible. If not, then take ownership for that, go back to the drawing board and make sure v2 executes as intended.

For the client it’s important to understand that for creative people, perceived criticism of the work can feel incredibly personal. Even if this first version feels a long way from where you need it to be, start the feedback by acknowledging all of the ways in which the team has delivered great work that hits against the agreed approach. It’s tempting to ignore what went right (since that doesn’t need to be addressed) and just focus on what didn’t (since that’s what you need the team to look at), but you run the risk of bruising egos and making your partner less willing to cooperate.

As the client, make sure to give consolidated, clear and non-contradictory feedback. That means gathering feedback from all internal stakeholders on your side and consolidating it into a single list. If one person loves a particular shot and wants it to hold for longer, but another person hates the shot and wants it removed entirely, you can’t give the production team both notes, because they won’t know which one to implement. So you need to have discussions first to establish which note takes priority and only pass that one along.

Should you give notes that are questions? For example “what do you think about this shot of the guy at the CNC mill? Is it working?” Well, It’s a guarantee that the production team agonized over every single shot that made it into the edit, so if it’s in there, it’s because they do think it’s working, so you have the answer to your question already, and you need to figure out if you  think it’s working so you can give a note on it or not. It’s okay for that note to be “I’m not sure if this shot is working, because the guy at the machine looks a little bored, but I don’t feel super strongly about it. If there’s another option that you like that could go here instead, let’s explore that, but if this is the strongest option, let’s stick with that.”

The best notes a client can give are about whether something is delivering against a specific goal or need, without offering a solution. For example, any note that begins with “I don’t like…” is unlikely to be a helpful note – many things are subjective and a sample size of one is statistically useless.

If you don’t think the music is working, here are two possible notes you could give:

I don’t like the music. I’d prefer something that has a similar sound to the song Uptown Funk by Bruno Mars. I think that would work much better here.

Currently the music feels very upbeat and energetic. We feel the piece would overall benefit from music that feels more emotional and evocative – is there another option for the music?

The first one is didactic and leaves the team with two options – either blindly agree with the suggested solution or push back that the original choice was correct. With the second one, there’s a why that the team can understand – the client wants to make a change with a specific outcome in mind, and the team still has the freedom to use their expertise to implement the best solution to achieve that goal, or push back that they disagree with the goal entirely.

For both sides it’s also important to recognize each other’s area of expertise when thinking about pushing back on specific feedback or suggestions. In broad terms, you could say that while the client usually knows more about their business, their industry and their audience, the production team usually knows more about the nuances of how video reaches people on an emotional level.

Pushing back is key throughout the feedback process and both production and client teams will get the best results by encouraging back and forth conversations. One of the most frustrating things on the production partner side is when you feel like the client is telling you what to do and you’re simply responsible for implementing it, rather than being a part of providing a sensible solution. When that happens, it’s very tempting to shut down and make changes even if you know that making those changes will have a negative effect on the overall quality of the video. “They’re so sure they want Uptown Funk? Fine, I’ll give them Uptown Funk….”

Most production teams have formats and processes for notes that are designed to let them work as efficiently as possible to make the changes that will lead to delivering v2, and it’s important on the client side to honor that system. Some teams will want a list of notes, with timestamps, via email. Others might use specific tools like the Review page in Vimeo. For clients, if a production company asks you to follow a specific review process, respect that and it will help make sure you get to the final video as smoothly as possible.

The original services agreement should stipulate how many rounds of review the client is entitled to before incurring additional costs. This is really important to bear in mind so that the rounds of review are used judiciously.

Once the production team has the full lists of consolidated notes from v1, it’s usually a fairly quick process to implement those changes and turn around v2.

Once that list of notes dwindles to nothing, the production team will be ready to deliver the final version of the video. The editor will export a version at the best possible quality and make it available to download from a file-sharing service like Google Drive or Dropbox so that the client can upload it to their own YouTube or Vimeo account, ready for release into the world.

The project is complete, and hopefully the client is already thinking ahead to the next opportunity to work with the production partner.

Next week we’ll start looking at what branded content costs to produce, with reference to an example that you’ll hopefully find useful and relevant.